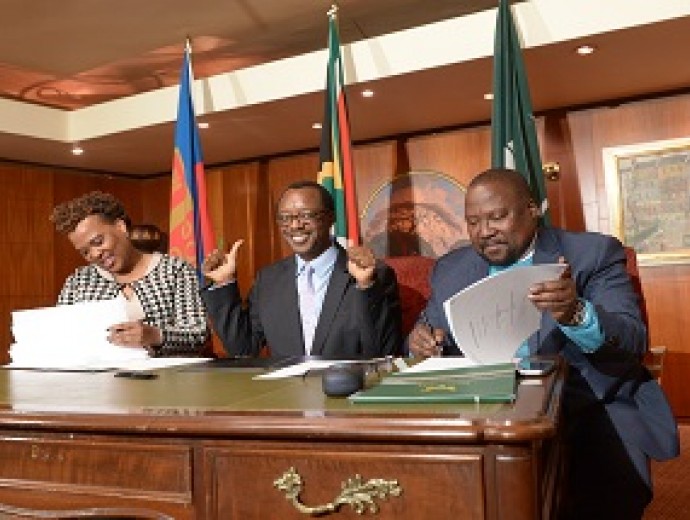 On 14 June 2019, the University of Pretoria (UP), South African National Parks (SANParks) and the South African Heritage Resources Agency (SAHRA) entered into a heritage agreement regarding the Mapungubwe Collection. The agreement represents the institutions’ continued collective commitment to the collection, and their support for maximising wider public access to it. The institutions also agree to collaborate on the realisation of their collective responsibility for the management, safekeeping and promotion of Mapungubwe’s heritage.

“The Mapungubwe Collection represents a tangible example of Africa’s rich heritage, culture and economic capacity throughout history,” Prof Kupe said. “The University of Pretoria is proud to be one of the custodians of these remarkable objects, which are national, continental and world treasures.”

The agreement marks a new development in the relationship of these three institutions, which was previously regulated by a memorandum of understanding (MoU) in June 2009. The MoU set out the principles according to which the parties would conduct future discussions, and informed the manner in which the institutions entered into this heritage agreement, which reflects a much clearer vision of each institution’s roles, responsibilities and obligations with regard to the Mapungubwe Collection.

Dr Sian Tiley-Nel, who has served as Chief Curator of the Mapungubwe Collection on behalf of UP for almost 20 years, has been technically involved since the very first negotiations, which began back in 2003. She said, “The signing of the heritage agreement on the Mapungubwe Collection is a significant and historical milestone, and assures its continued curation under the responsibility of the UP Museums, as a serious responsibility of what is deemed a national resource.”

The agreement outlines UP’s institutional commitment, as the custodian of the designated collection, to continuing accountable curation and conservation, its educational role to academic communities, research, and making the collection accessible to all civic communities.

“We will continue to curate, preserve and conserve these and other collections so that future generations have the benefit of this knowledge,” Prof Kupe said. “The University’s new master’s degree in Tangible Heritage Conservation aims to produce a new generation of highly skilled professionals who are able to conserve rich cultural heritage from around the world.”

“The signing of the agreement represents a milestone in the journey that SANParks started to improve the management of cultural heritage under its stewardship and ensure that this is done in close co-operation with key role players like UP, SAHRA and communities,” said SANParks CEO Fundisile Mketeni. “The Mapungubwe Kingdom, as evidenced by the collection, remains one of the most important periods in the development and civilisation of the Southern Africa region – a period of great pride to all Africans.”

Finally, the agreement acknowledges the obligations of SAHRA as the national heritage authority mandated to co-ordinate the identification and management of the National Estate of South Africa. This includes monitoring co-operation pertaining to the Mapungubwe Collection in terms of the National Heritage Resources Act No 25 of 1999.

“The specifically declared Mapungubwe Collection is one of the most important collections in South Africa that forms part of the National Estate, because it offers insight into trade between 1000 AD and 1300 AD,” SAHRA Acting Chief Executive Officer Lungisa Malgas said. “SAHRA appreciates that after 10 years of engagement UP, SANParks and SAHRA have reached an agreement about the management and conservation of this significant collection. SAHRA will fulfil its obligations to ensure that the collection is enjoyed by many generations to come.”

Pain insensitivity in African Mole-Rats: another benefit and lesson to learn from Rodent

Universities must help secure a sustainable future for our planet

Identification of protective antibodies may be key to malaria vaccine